21/03/2017 sees the last games of the season. The A League is pretty much done and dusted barring a battle for second place in a season where the Ox-fford ‘C have reigned supreme.

The B League still has the title to be decided but congratulations to the British Flag and Waters Green Rams who will be going up next season.

In the C League, the Plough Horntails will be going up and the other promotion spot sits between the Harrington ‘B’ and the Park Timers. In both B & C Leagues, the last round of matches will decide the League Champions.

Finally, my appearances as a player and my efforts at producing these notes have been very sporadic since Christmas due to commitments elsewhere. I’m grateful to my team for filling the gaps in my absence and to everyone else for their patience in waiting for me to get around to things.

The loss of Matt Rogers in recent weeks has also brought more perspective to our weekly entertainment, following on from last year’s loss of both Rick Davis and Alan Levitt. It feels a good time for a summer break, with only one other thing remaining, namely…

The evening will consist of the Cup Final and then the presentation of all this season's prizes. The Cup Final match is: -

Questions for the Final will be taken from those supplied by all the teams using the sheet and envelope supplied tonight.

The Dolphin and the Waters Green Lemmings will assemble the questions from those provided. If you haven’t done so already – and thank you to the many of you who have – please submit your 20 questions for the Cup and Plate Finals in a sealed envelope to Waters Green Tavern by close of play on Tuesday.

Also available on the Finals Night will be the season's last News & Views, which will give all the tables and statistics for the entire season.

Please support the last “Do” of the season and come and collect your final News & Views - you may even find you have won something!
Posted by MW at 00:04 No comments: 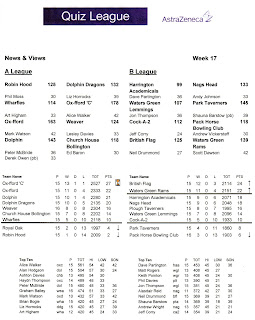 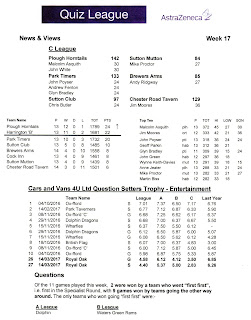 …to the Ox-fford ‘C’, already uncatchable as A League Champions this season.

The Ox-fford ‘C’ are also going for a League and Cup double, which hasn’t been done for over 10 years (2005/06 to be precise), although the Royal Oak would hope to insert a spanner appropriately in that respect.

Congratulations too to the British Flag, back in the A League again next year and just a point from their last two games will seal the B League title.

All very tense in the C League where 2 of the top 3 will be going up. Interesting that the current top two – The Harrington ‘B’ and the Plough Horntails – play each other next week in the very last game of the season.

It will be more exciting than that Europa League football, that much is certain…

Following that, the Finals Night will be at…

The evening will consist of the Cup Final and then the presentation of all this season's prizes.

The Cup Final match is: -

Questions for the Final will be taken from those supplied by all the teams using the sheet and envelope supplied tonight. The Dolphin and the Waters Green Lemmings will assemble the questions from those provided.

Questions for Cup and Plate Finals

Questions for the Cup and Plate Finals should be returned to the bag at Waters Green Tavern by close of business on 22/03/2017, which is the Wednesday after the last night of the season.
Posted by MW at 23:30 No comments: 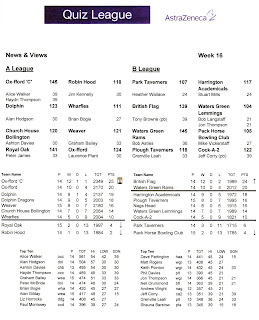 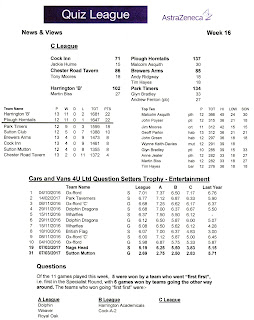 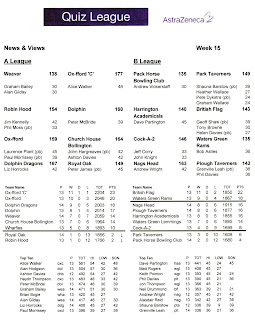 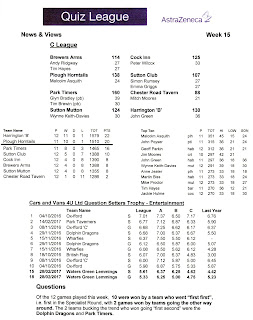