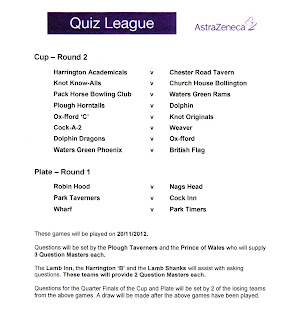 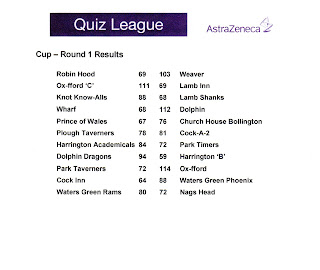 Some very close games this week, with two of the four games in the B League being as close as you can ever get and ending in draws.

The first three weeks have seen a whole raft of close finishes and the season is a little unusual in that only 5 of the 27 League teams haven't yet lost a game.
Posted by MW at 08:20 No comments: 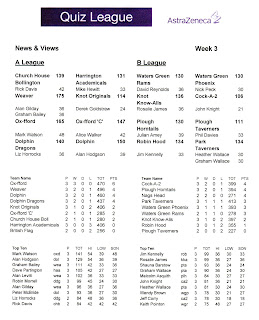 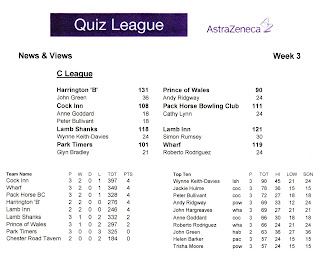 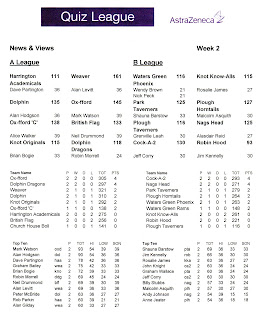 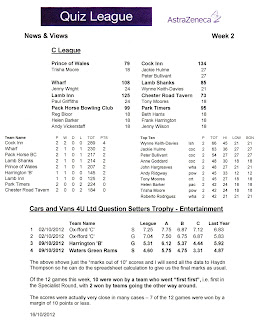 We are off and running for 2012-13, and what an excellent set of questions to start with from the Ox-fford 'C'.

Not just I say that, the marks given by all teams averaged out at over 7 out of 10, which history suggests is a remarkably good score!

Week 2 is almost upon us and I will endeavour to keep all records updated more promptly than in recent years. I am slightly running out of excuses too!

Finally, can I just thank all in the Quiz League who so kindly donated to my recent Shine Marathon Walk for Cancer Research in Manchester - thank you everyone. The latest (and nearly final) total raised can be found here... 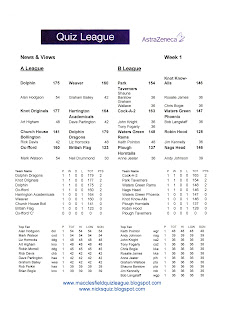 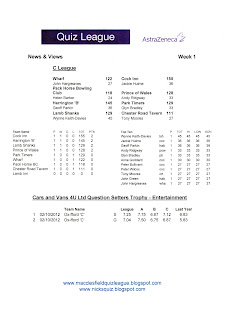 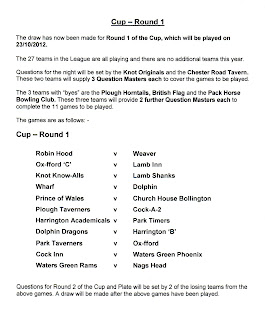 
As the traditional wind and rain of Autumn cement their grip around the throat of a desperate, dead summer, what better to cheer us up than Season 32 of the Macclesfield Quiz League!


For those who weren’t at the Finals Night or the AGM, the Cup Final was an all Dolphin affair, with the Dolphin beating the Dolphin Dragons 106 – 81.

The Plate Final was contested…err, no it wasn’t!

The Harrington Academicals were due to play the Park Tavern ‘B’, a side who only entered the Cup last year you may remember and did very well. The Park Tavern team ultimately couldn’t get a team together for the final, arrangements for their attendance seemingly having collapsed at the last minute despite all being well just the night before for them to attend. The Harrington Academicals thus win by a walkover – and the Plate for the third year running!

An entertaining game was then played between the Harrington and a “Scratch” team of quizzers which ended in a 109 – 89 win for the “Scratch” team – a pretty nifty team too consisting of Alan Hodgson, Rick Davis, Keith Pointon and Glyn Bradley.

The game was expertly “question mastered” by Bob Langstaff and I would like to thank him along with Nick Peck from the Waters Green Phoenix who scored etc, plus the Plough Taverners (and Grenville Leah) who sorted questions. Thanks also to Pete Dykstra for his gallant efforts in trying to assemble the Park Tavern ‘B’.
Posted by MW at 10:48 No comments: