I’m pleased to report that all went well at the AGM and Plate Final on Tuesday this week.

The Plate Final was well-contested with the Dolphin Dragons beating the Wharfies by 107 – 97 in the end. Well done to both teams and a picture of the winners is below. 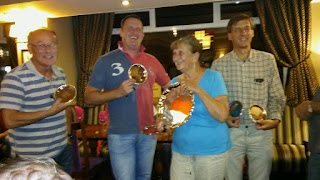 Many thanks to Haydn and Alice for asking the questions along with the Sutton Mutton and Pack Horse Bowling Club for setting them.

AGM-wise, the bottom line is we have exactly the same number of teams as last year so all the teams who were promoted / relegated last season will go up / down as planned and it will be 9 teams again in the A and B Leagues and 8 in the C League.

Subs remain the same too at £50 per team, no increase again this year.

Fixtures / rules / documentation etc. can be collected – and the £50 subs paid – from the Weaver on Tuesday 27 September.

I will be there from 6.30pm to 8pm or thereabouts on that date, hopefully along with Marshall Barnard who will issue the usual receipts etc.

We will then play the first games of the season on the following Tuesday 4 October.

The following teams have volunteered for question setting in the first two weeks of the season – many thanks to them:-

Week 1 questions – i.e. the 4th of October will be done in their entirety by the Ox-fford.

Week 2 (11th of October) questions will be set by the Chester Road Tavern (Specialist) and the Waters Green Rams (General Knowledge).

Week 3 (18th of October) will see two other teams setting the questions, I will let those teams know who they are ASAP.

I will email everything out once it is done.
Posted by MW at 00:38 No comments: