The very latest available scores to the end of Week 3...

I know it is a bit crooked. Well, nobody's perfect...

Light nights are now but a distant memory as Week 4 came and went. I'm hoping my science question from last week has gone for some time as well!

Another action packed Tuesday with individual honours going to Keith Pointon from the C League's Waters Green Rams, who outscored everyone else bar none with 45 - well done Keith.

Breaking news from the Church House Bollington who may indeed have broken new ground by fielding League's first German competitor, Christian Stocker. Christian was instrumental in picking up a number of passed-overs and was jubilant when being the only player to know the ‘Fast Eddie’ from Motorhead question. It did however look like he would remain individually pointless until coming up with Jack Nicholson for the very last question of the night. Sadly the Church House were unable to force a penalty shoot-out where Christian would no doubt have been untouchable...

Another enjoyable evening overall. Where else can you combine tokamaks, bog-snorkling, aged high-jumpers and the Lavender Hill Mob? Who needs a TV! 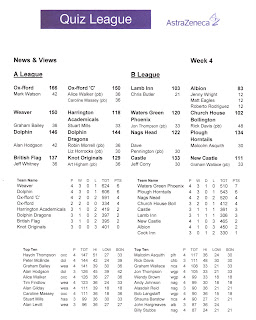 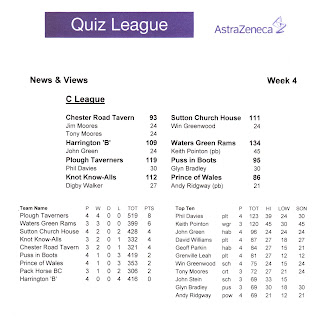 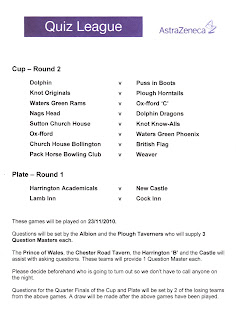 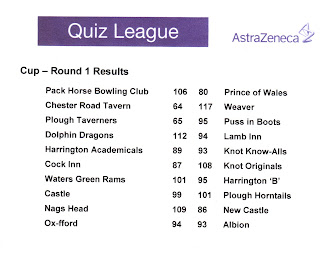 Apologies for the delay in posting, but here we are at last.

Some very close games this week with the Cock Inn and Lamb Inn having the closest of all finishing in a draw with 121 each - the second draw of the season at this early stage.

Special mention should be made of Chris Wearne's 45 for the Dolphin Dragons (and Dave Turner's 33), along with the best score of the week, 48 for Rick Davis of the Church House Bollington. Julian Amey of the Plough Horntails also had 42 in the same game.

Keith Pointon from the Waters Green Rams continued his strong start to the season with a 'C League best score of 45.
Posted by MW at 13:48 No comments: 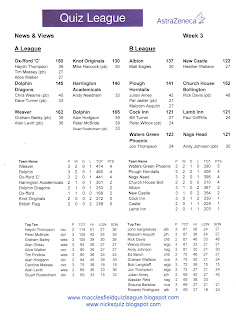 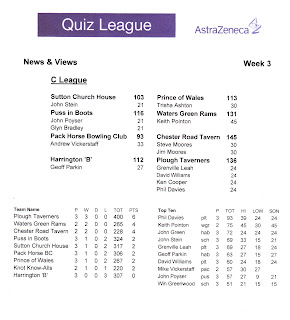