Tonight - last games of the season...

Where did 2011 go? Tonight sees the last League games of this season with various issues still up for grabs.

Congratulations to the Ox-fford ‘C’ for becoming A League Champions, and similarly to the British Flag for doing the same in the B League.

Apart from the Flag, everything else in the B League will be decided tonight. In promotion terms, one of the Waters Green Phoenix, Church House Bollington or Park Taverners will go up with the Flag. It is still completely unclear who may be going down to the C League will all hinging on the final games tonight.

The C League itself will have a resounding finish. We know the Knot Know-Alls and the Robin Hood are already promoted and the Robin Hood will have to score a record number of points in beating the Cock Inn if they are to overtake the Knot for the C League title. Stranger things have happened though – many of those being penalties not given to visiting teams at Old Trafford…

The evening will consist of the Cup Final initially and then the presentation of all this season's prizes.

If you haven’t done so already, please submit your 20 questions for the Cup and Plate Finals in a sealed envelope to Waters Green Tavern by close of play tomorrow. Thank you to all those who have sent in questions already.

Also available on the Finals Night will be the season's last News & Views, which will give all the tables and statistics for the entire season. Please support the last “Do” of the season and come and collect your final News & Views - you may even find you have won something!

See you all then if not before. 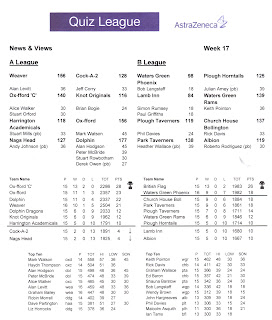 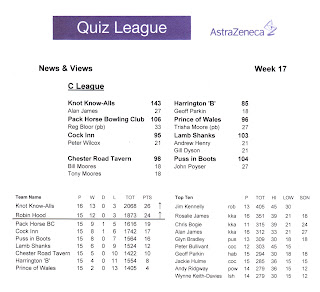 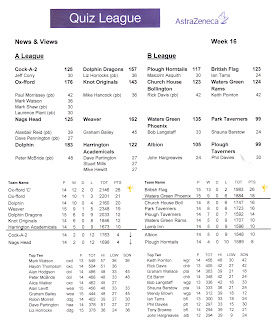 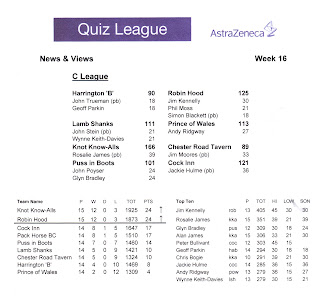 As you can see, much has happened as a result of last week’s scores and the usual “up” (but not yet “down”) arrows have started to appear, along with a couple of trophies.

Congratulations to the Ox-fford ‘C’ who are confirmed as A League Champions with 3 rounds of games to spare. Can they go through the entire League season unbeaten???

Similar congratulations must go to the British Flag, confirmed as B League Champions and promoted to the A League for next year. There is no end of possibilities for the runner up spot which the Waters Green Phoenix are clinging onto for now.

Finally, the C League is seeing a titanic tussle between the Know Know-Alls and the Robin Hood. Only points scored separates them now with the Knot having scored just 11 points more over the season so far. Both will be promoted to the B League next year whilst they fight out the remainder of the season to see who gets the title. 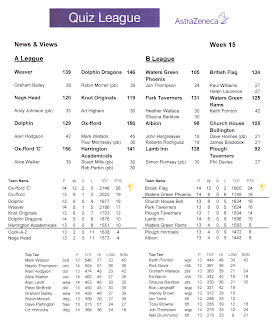 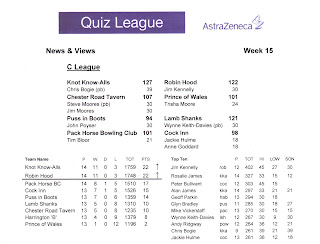 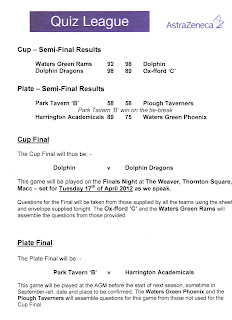 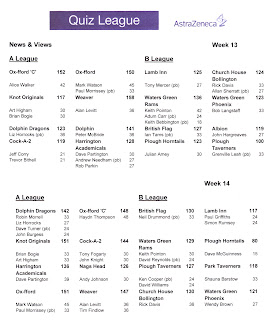 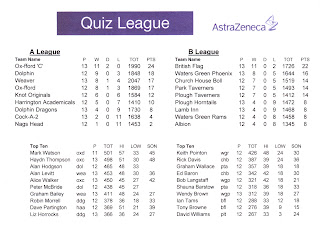 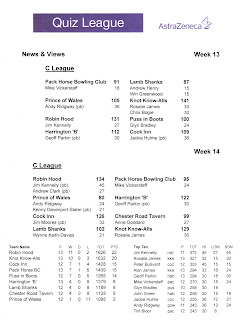