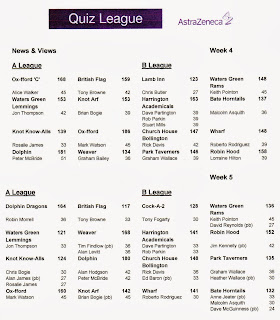 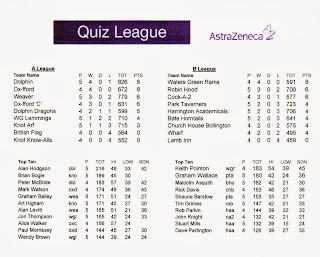 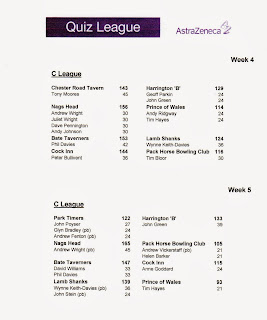 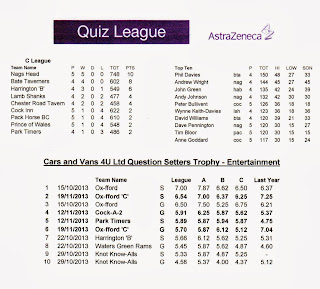 If you need more quiz action...and like to support good causes...

Allan Sherratt informs me that the Church House Inn, Bollington is holding a regular monthly quiz in aid of the Macmillan Macclesfield Live at Home scheme.

Entrance is £5 per team and quizzes are due to be held on the 8th of December and the 12th of January.

The quiz is in aid of the East Cheshire Hospice and there will be various prizes including funniest team name, worst score etc. as well as the normal winner’s prizes and raffles. Refreshments will be provided.

Entry is £2 per person and no more than 4 people to a team. Nick tells me that there may well be several "loose ends" happy to make up a team on the night.

This quiz is designed to be a fun evening and all are welcome. Having fun and raising money for East Cheshire Hospice will be more important than winning.

Both the above events are in aid of excellent causes; please do give them your support if you can.
Posted by MW at 01:07 No comments:

The second round of the Cup and first round of the Plate has some interesting fixtures - including one or two truly heavyweight contests. See below for the full story... 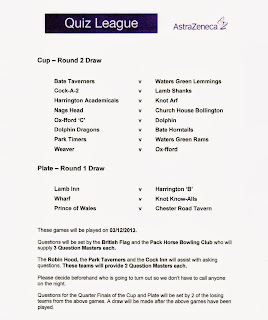 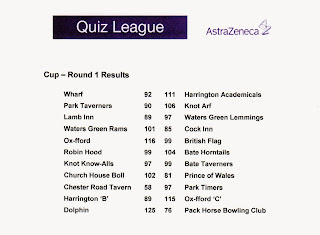 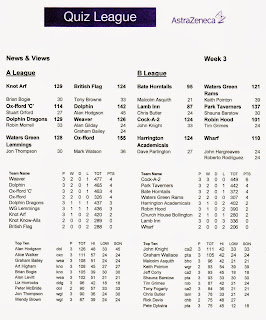 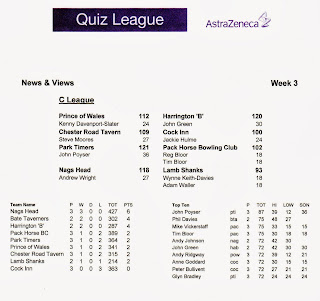 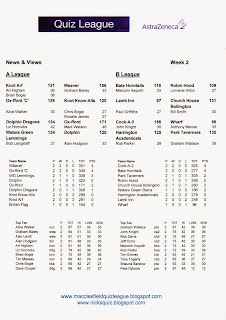 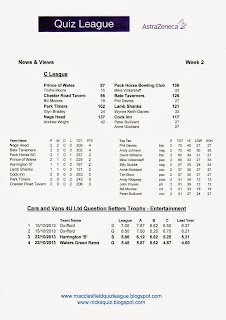 Change of venue for two teams...


As many of you will have seen from previous correspondence, the Plough on Prestbury Road is having a change of licensee etc and in addition is going to be closed for at least the short term, so both teams who play from there (Horntails and Taverners) have decided to relocate and they are both moving lock, stock and barrel to the Bate Hall on Chestergate.

The two teams will henceforth be known as the Bate Horntails and Bate Taverners.

All records will be amended from the next News & Views onwards.
Posted by MW at 16:13 No comments:


Week 1 kicked off with an excellent week of scoring as you can see, with no less than two ‘57s’ (Alice Walker and Peter McBride), a ‘54’ (Keith Pointon) and two ‘51s’ (Alan Levitt and Graham Bailey). Congratulations to all concerned.

Two teams also scored over 200 points in total, namely the Ox-fford ‘C’ and the Dolphin, a feat that hasn’t been done before to my knowledge. Let me know if you know otherwise…

Well done again to all the above. Records are there to be broken!
Posted by MW at 16:02 No comments: 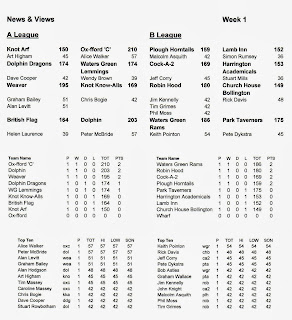 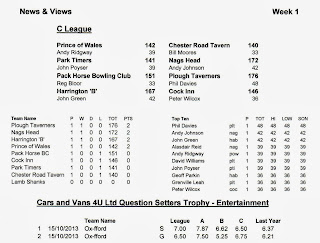 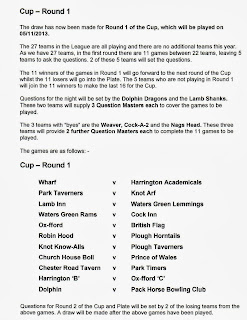 
It is that time of year again - Season 33 of the Macclesfield Quiz League looms!


At the AGM on Tuesday we had a nail-biting Plate Final which ended in an 81-79 win for the Plough Taverners over the Park Taverners. Congratulations to both teams for an exciting contest and particularly to the Plough for securing their first trophy for many years – since their previous incarnation as Macc Cricket Club, I think.

The game was question mastered by Paul Morrissey and I would like to thank him along with the Lamb Inn and the Nags Head who provided the questions – special thanks to Paul Griffiths, Chris Butler and Billy Stubbs.


The AGM had slightly more business than usual to determine but a good debate was had by all present and the below two changes were decided upon ultimately:-

I am currently working on the fixtures which will be complete by next Tuesday the 8th of October.

You can pay the subs and collect all the fixtures / rules / documentation etc from the Weaver, Thornton Square between 6.30pm and 8pm on Tuesday the 8th of October 2013. I will be there along with Marshall Barnard who will issue the usual receipts etc.

The first game will be the following week on Tuesday the 15th of October.

The following teams have volunteered for question setting in the first two weeks of the season – many thanks to them:-


Week 1 questions – i.e. the 15th of October will be done in their entirety by the Ox-fford.


Week 2 (22nd of October) questions will be set by the Harrington ‘B’ (Specialist) and the Waters Green Rams (General Knowledge).

Week 3 (29th of October) will see an A League team setting all the questions again, I will let that team know who they are ASAP.

All will be done by Tuesday and I will email everything out after that.

Some of you have already sponsored the Harrington Academicals’ Rob Parkin who ran the Berlin Marathon last weekend – an event notable for a new Marathon World Record time set by winner Wilson Kipsang in 2 hrs 3 mins 23 secs (it will be a question soon, you can be sure of that!)

Rob achieved his target of going round in well under 4 hours which deserves our collective hats being taken off to him and some sponsorship going in his direction if you haven’t done such a thing already. Rob ran to raise money for East Cheshire Hospice once again and has a Justgiving page at the below link…


Many thanks to all who attended the Finals Night on Tuesday. The Weaver did us proud before it undergoes whatever changes it is seemingly due to undergo!

There was an excellent turn-out and photos are posted below all things being equal.


The result of the Cup Final saw the Ox-fford beat the Harrington Academicals by 113 – 68. Congratulations to all concerned.


Thanks must go to Rick Davis and Paul Griffiths for asking the questions and scoring respectively. Thanks also to Keith Pointon of the Waters Green Rams and Peter McBride from the Dolphin for question preparation. An excellent effort by all concerned.

The final trophy of this year will be settled at the start of next season as usual. The Plate Final will be:-


This game will be played at the AGM before the start of next season, date and place to be confirmed. The Nags Head and the Lamb Inn will assemble questions for this game from those not used for the Cup Final.


An excellent season saw the Lamb Inn win the C League with the Wharf also promoted in finishing second.  John Hargreaves won the C League Individual title for the second time, adding to his win in 2008/09.


In the B League – the most tightly contested League of all this season – the Waters Green Phoenix emerged triumphant at the top of the tree with the Knot Know-Alls finishing second. Both will play in the A League next time around.


Keith Pointon bagged the B League Individual title for the second year running (having won the C League equivalent the year before that).


The Ox-fford 'C' were deserving A League Champions losing only two games all season and they remain the team to beat after a great season of strong all-round performances.


The Ox-fford won the Cars and Vans 4U Ltd Question Setters Trophy for their General Knowledge questions from way back in Week 5.


If I don’t see you before we start again, have a great summer and see you in the autumn when we will do it all again...